Creating a 3D object on a CNC indexer

February 17, 2015
This week I set out to run my first 3D indexer job on my ShopBot machine. The indexer (a lathe like tool) along with the CNC spindle is quite a capable tool. Up to now, I've only used it to create symmetrical carvings, much like would be produced by a standard lathe.

I needed a model that didn't have a lot of undercuts. An undercut is a place on the model where the bit won't be able to reach. Since the bit always goes straight down towards the center of rotation of the model, anything that is hidden from above can't be cut. For models of animals, a naturally bent leg or the back of an ear would create an undercut. The model I chose, a porcelain cat, had undercuts between the ears but that's all. I figured that would be easy enough to chisel out by hand.

The digitizing process is fairly easy using my NextEngine 3D scanner. This device is painfully slow but for doing once in a while 3D scanning, works quite well. The resolution is excellent and it's mostly an automatic process. The indexing base turns the model a number of times (selected in the software) and all the resulting scans are automatically stitched together into a complete 3D model. The drawback of this method is it doesn't capture the top or the bottom. Additional scans have to be performed to capture those areas and then the model has to be manually aligned so the software can combine them all into one solid form. Scanning the "cat head" took about an hour and a half. I needed to do three scans (circumference,   top and bottom) to get a decent model.

Once I had the scan, the next step is to bring the model into Rhino to scale, rotate and add a base and mount for the indexer. Rhino is a fairly complicated program that works a bit differently than the other tools I use. It is fairly easy to manipulate solid components with the software though. Once finished, I saved the completed model as an OBJ file.

After I had the dimensions of the finished project, I ventured out to the wood pile to find a suitable log to turn into a blank. I found a suitable log, actually firewood, from a cherry tree we downed a few years ago. Some of the logs I've used have very nice grain and colorful features. Using my electric chainsaw (an Oregon 40v machine - quite excellent!), I cut a 90 degree (as close as I could anyway) cut on both ends so it would mount in my indexer. Then I sliced off the bark and any bits that protruded out beyond the wood with the chainsaw.

To turn a log into a blank, there's a gadget included with Aspire for rounding raw material. I performed that function and ended up with a 6" diameter blank. I took off about an inch to get to heart material. The outside of the log tends to have more rot, soft wood and bore holes from insects.

Once I had the blank ready, using Vectric Aspire, I imported the OBJ into a job set up for the indexer, aligned it, and then prepared the tool paths for the ShopBot. I chose to do four toolpaths:

1. Roughing with a 1/2" end mill at 1/4" depth and 70% stepover rastered along the Y (long) axis. This is a fairly aggressive cut that takes a lot of material out of the blank quickly. The result is a kind of chunky outline of the finished piece. This ran about 15 minutes. There are a lot of flying chips in this step and it's messy. The resulting chips make excellent fire starting material though, so I keep them for the fireplace.

2. Finishing pass with the 1/2" end mill 10% stepover along the Z (radial) axis. This also is kind of aggressive as it takes out a lot of the material left over from the roughing step. This step runs in about 15 minutes.

3. Finish pass with a 1/2" ball mill at 10% stepover along the Y (long) axis. This pass clears out most of the step like material left on the blank. This step runs in about 25 minutes.

4. The final finish pass with a 1/4" ball mill at 5% stepover along the Y axis. This pass sort of "sands" the model and removes as much material as the indexer can reach. A further pass with a 1/8" or smaller end mill would probably remove a bit more but the time it takes would be prohibitive. This step ran nearly three hours. This picture shows the finished model prior to removal from the indexer. 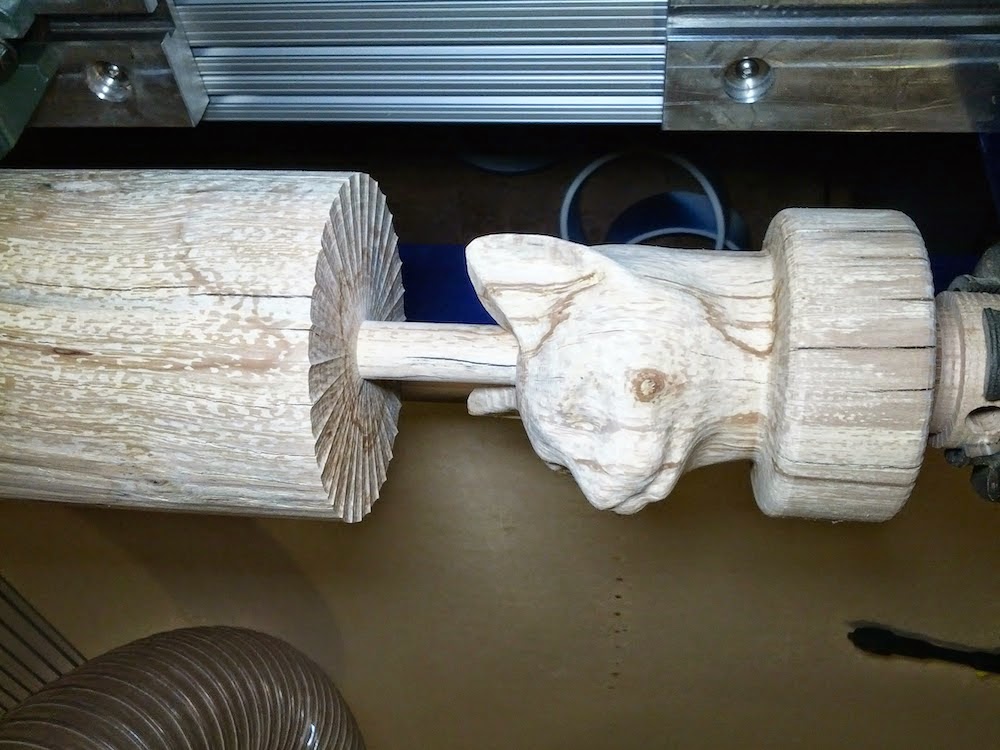 Once the machining steps were complete, removal of undercuts (between the ears) and the mounting stem were accomplished using a bandsaw and hand chisels. A complete hand sanding is required to remove tool marks. A clear coat and felt on the base completes the project. 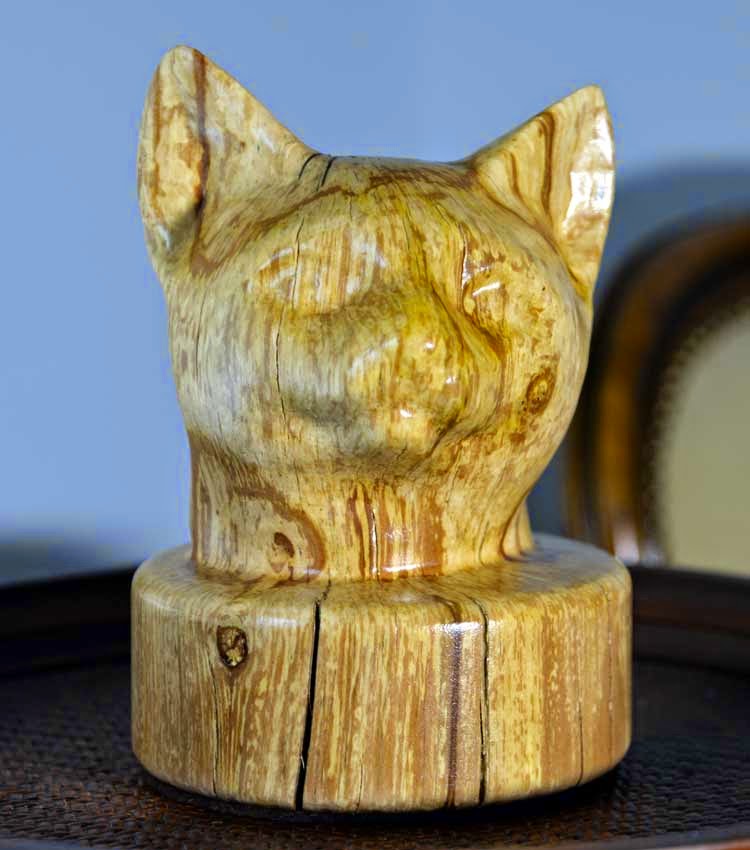