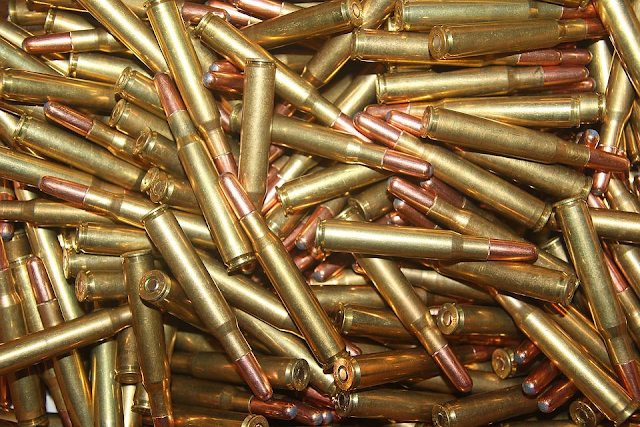 The gun control battle is lost. It's pointless to try and control access to guns. If sales stopped today, there would be many millions of weapons left on the streets. Guns last a very long time too. A hundred year old gun will still fire if maintained properly.

So how can gun deaths be reduced and even controlled? By controlling the consumable part of the death chain: The ammunition. It's simple. No bullets. No bang.

Gun enthusiasts the country over will likely rebel instantly over such a thought, unless there's something in it for them. That's the key to making this work. If it was a win-win for everyone, then it could be passed.

How could ammunition control be a plus for the average gun enthusiast? By removing the barriers that the vetted enthusiast has to jump through now.

A program, similar to the TSA's "Trusted Traveler" could be built so that vetted enthusiasts would receive a card, good for five years, that would allow them to buy all the guns and ammunition they want. Go to a show, show your card at the door, and buy whatever you want, without any further checks. No waiting either. Pay and walk out the door with your purchase, just like it was Home Depot.

Applying for a "Trusted Handler" card would be as simple as buying a gun is now, with a few extra checks. Your information would go up to a review board of fellow gun owners, FFL's (Federal Firearms License) who are in the program, chosen by their peers, to decide if your application passes muster. If rejected, an appeal process could override the local board. The process to receive a card should take less than a month, during which time the applicant is limited in what they can purchase.

The "Trusted Handler" card would be issued to any current open carry licensee, regardless of state, and show an endorsement for "universal carry" where they can openly carry their firearms in any state, as long as they follow local ordinances. They can buy a weapon or ammunition in any state, regardless of their residence status, just by showing their card. No further background checks or information required.

New members to the "Trusted Handler" program can apply for a universal open carry endorsement by completing a qualifying open carry program at their local range, or by presenting an application to the local board for approval. Rejection by the board wouldn't allow appeal as the applicant can use the open carry option at their local range instead.

When a "Trusted Handler" purchases a weapon, the seller records the fact of the purchase and reports the weapon sold, but isn't required to state the purchaser. The seller records that information and only reports it when requested by the local board, on prompting by official channels (such as the police or FBI). The local board can refuse a request if they deem it to not be warranted. An appeals process would be in place.

"Trusted Handlers" would no longer be subject to time consuming and potentially embarrassing background checks each time they made a purchase. Being a "Trusted Handler" assures trust.

Additional benefits such as discounts at firearms retailers, ranges and national organizations would help offset the application fee. Such discounts would also allow companies and organizations to openly support this program.

Selling, giving, loaning and otherwise allowing guns and ammunition to fall into the hands of those not in the program will result in revocation of privileges for up to five years. Cases of abuse of the regulations will be adjudicated by the local review board. An appeals process will be available.

A review board composed of locally resident FFL holders for at least five years, that are in the program, and chosen by their peers, would review applications for new members, and other program business. The local nature of this panel would give the review board a perspective on their area that only local resident would have. This would be a paid position funded by the program.

Information from the police, courts and other sources would be fed into the system to flag members who have been disqualified. Local review boards can reinstate a member who has been disqualified within reason. Once disqualified, the member would be required to relinquish their ammunition supplies. Suitable arrangements for secure storage of relinquished ammunition would be allowed, as well as transfering ammunition to another member in good standing. Failure to dispose of ammunition stocks will cause the member to be suspended for up to five years without appeal.
Members who are disqualified will be immediately notified by their local review board.

An app would be provided that can verify a membership card by a QR code on the back of the card. The app returns a stored picture of the card to help screen out fakes and forgeries. If the member is suspended, or has an expired card, the app will report the user as disqualified. The app would have security features to protect privacy.
An API would be provided to allow merchants to quickly verify membership by the member number. For online sales, the merchant would have to verify the address of the member before shipping ammunition.
As the proverb goes "Trust but Verify".

Revenue from application and renewal fees, similar to that of the TSA's "Trusted Traveler" program, a tax on safety ammunition, and sponsorship opportunities on the verification app should allow the program to be tax revenue neutral (cost nothing to the taxpayers).

For those not in the program

Anyone can still purchase firearms with the standard waiting periods for their jurisdiction, and the standard background check. With their purchase, they will receive one box (up to 50 rounds) of low powered, lightweight "safety" rounds that can still kill, but will be much less damaging. These gun enthusiasts can purchase all the rounds they can fire at a gun range, but it will be the same low power safety rounds. They'll be limited to one box a month if purchased at a retail outlet. Their information will be recorded when making any ammunition purchase and forwarded to a central office for aggregation and analysis, much like pharmacies have to do with cold medication.

Folks with surpluses of ammunition they would like to sell, give, donate or otherwise dispose of, would have to go through an FFL, just like selling a gun. No private transfers of ammunition would be allowed unless all parties are in the "Trusted Handler" program.